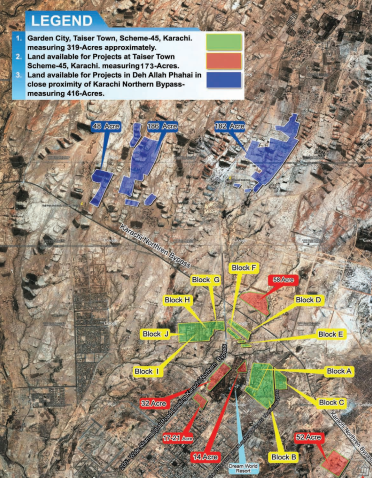 The tremendous growth potential of the real estate sector in Pakistan, backed by correct economic fundamentals and macro indicators, has attracted substantial foreign investment over the recent years and high-profile projects have been undertaken by some big international names. Maxim Properties is specially geared up to facilitate foreign investors and enter into mutually beneficial collaboration with them in Pakistan. This collaboration can take shape into all types of residential, commercial or recreational projects of any scale or magnitude. However, in view of the needs of the populace of Pakistan, low-cost housing schemes are most feasible for our market and attract maximum response.
We welcome both local and international investors to join hands with us in investments in real estate projects in Pakistan, which is one of the most hyped as well as substantive market of its kind in the region. The prospective investors can collaborate with us in several ways. For example, investors having their own land can enter into joint-ventures with us to develop / construct projects on their land. On the other hand, for those with investment and looking for business opportunities we can provide land for residential or commecial projects that would make their investment sound, secure and profitable.

As a result of highly calculated investment over the years, today Maxim Properties is in possession of land holdings bearing immensely lucrative development potential. The extent and value of this potential is accentuated by the location of these land holdings in Taiser Town, Scheme-45 and along Northern Bypass in Karachi as marked on the plan appearing here.

Being a coastal city, ancient Karachi had its initial moorings by the Arabian Sea in the South. Having experienced explosive growth over the past more than sixty years since the independence of the country, Karachi is now vastly and rapidly expanding towards North with the nation’s largest and most auspicious development scenario emerging at an unprecedented scale.

Taiser Town, Scheme-45, estimated to be the largest scheme of its kind in Asia, is at the core of this Northward development. Another landmark development in the area is the 57 kilometer long Northern Bypass that has opened up new vistas of large-scale urban development over a vast expanse of virgin land along its both sides. The development opportunities a galore in the area are already being availed and a large number of public and private sector projects of various types are underway.

Maxim Properties has the distinction of having already completed and delivered a major housing project, Garden City, over an approximate area of 319 acres, in Taiser Town, Scheme-45. The project is adjacent to the famous Dreamworld Resort and in close proximity to the fully developed and inhabited community of Gulshan-e-Maymar.

Maxim’s land holdings available for projects in Taiser Town, Scheme-45 are located in the surrounding vicinity of Garden City and Dreamworld Resort. Comprising a total area of 165 acres, this available land is in chunks of 52 acres, 52 acres, 32 acres, 17-21 acres and 14 acres.

By the Northern Bypass, we have land holdings measuring a total of 416 acres in Deh Allah Phahai available for new projects. Available in three chunks, the land is in truly close proximity to Northern Bypass. It includes a 48-acre chunk barely 300 feet from Northern Bypass, 186 acres just half a kilometer and 182 acres only three kilometers away.

Hence, these investment opporunities merit thoughtful consideration as the value of the land available for projects is greatly underscored by the location of the various chunks.

The growth of housing and construction industry in Pakistan has been typical that of a developing country. In view of a high rate of population growth and continuous influx from rural to urban areas, Pakistan faces a perpetual shortage of housing.